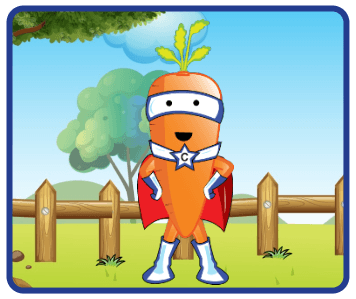 You might like to read this story with your child and listen out for all the 'c' words.

One worrying day, Carrie the Carrot heard about an evil cupcake who was attacking kitchens all over the land. Carrie decided that she should make a plan to save Miss Bagnall’s kitchen from this awful enemy and swooped down from the fridge to begin her mission.

First she visited the cutlery drawer and told them what was happening. Shocked and worried, they agreed to help in the mission and protect the kitchen by standing guard at the door; watching out for the approaching cupcake.

“That could definitely work!” said Carrie, “because that noise you make is very loud.”

Thinking that her plan was really taking shape now, Carrie climbed back up into the vegetable draw in the fridge and whispered the next part of the plan to the cucumber. If the evil cupcake made it past the cutlery and the can opener, Carrie would roll Cucumber out the fridge and knock the cupcake down like a bowling ball knocks down skittles. Cucumber thought this was a great idea and started practising his rolling skills, ready to protect his friends.

The plan was nearly complete.

There was only one more thing to think about... If cucumber did knock down the evil cupcake, how could they trap him?

Carrie asked the rest of the kitchen if they had any ideas and the whole room started chattering and trying to come up with a suggestion.

“Could we splat him with a catapult?” called a cup.

“TOO MESSY!” shouted the rest of the kitchen.

“What about a blast gun?” chorused the cans.

“We don’t have one,” reminded Carrie.

“How about we float down and land on top of the cupcake?” suggested the carrier bags, “but we might not be quick enough as we float quite slowly” one added looking worried.

It was no good. They could not think of a plan.

They would never be able to stop that evil cupcake now! Was this the end for Miss Bagnall's kitchen?

But... just then, from the back of the cupboard came a muffled noise, a metalic scraping sound that sounded like somebody was shuffling their way towards the front of their shelf, past all of the other pots and pans and tubs and bowls.

Suddenly, the cupboard door flung open and standing at the very front of the shelf, ready to speak was… cake tin!

“I know!” he exclaimed. “I could stay here, at the front of the shelf and if the evil cupcake comes, I could dive forwards, flip over and land on top of them like a tin prison.”

“What a perfect plan!” called cauliflower.”

“Miss Bagnall’s kitchen is surely safe now,” she said, puffing out her chest with pride at their great thinking.

And so, the plan was complete with the help of a carrot, cutlery, cups, a cucumber and a cake tin. Miss Bagnall’s kitchen would be forever safe from the clutches of the evil cupcake.

Or so they thought…